I am a self-taught painter, living in Woodbridge, Suffolk. My work is figurative, but drawn from the imagination as much as from my surroundings.  My main interest is landscape, but it is a particular aspect of the landscape that interests me; the balance between the natural and artificial, the effect that the imposition of man-made structures has on our natural surroundings.  This is particularly evident in the East Anglian landscape.  Man’s additions to and rearrangements of the countryside may not always look harmonious or picturesque, but they have a reason to be there and a strong visual impact.  Most of my pictures are not views of actual places, instead they are put together from various elements that I have seen at different times and in different places; buildings, landscapes, effects of light, figures and events.  I try to express the incongruous, sometimes disturbing quality of these images and their abstract forms.  I work in oils and acrylics and occasionally watercolour, and also use pastel for working outdoors.

Solo Exhibitions:
The Minories, Colchester in 1990; Denis Taplin Gallery, Woodbridge in 1989, 1993 and 1997; Gallery 44, Aldeburgh in 2002; The Halesworth Gallery in June 2004, Christchurch Mansion, Ipswich in December 2004, the Aldeburgh Gallery in September 2009 and May 2013.
Mixed exhibitions include:
Salon des Acceptes, Bury St Edmunds Art Gallery in 1985 and 1986 (work accepted but not hung in R.A. summer exhibitions).
Kew Gardens Exhibition at C.C.A. Gallery, Bath in 1988.
The Fry Gallery at Saffron Walden in 1988 and 1989.
With the “Young Blood” group in Ipswich from 1988 to 1997.
The Laing Landscape Painting Competition in Suffolk in 1993 and 1997 and the Mall Gallery, London in 1996.
“On the Border” at Christchurch Mansion, Ipswich in 1998,
“This Flat Earth” at University of Essex, Colchester in 2000.
“Our Town” at Christchurch Mansion, Ipswich in 2003.
“8 East Anglian artists” at the Peter Pears Gallery, Aldeburgh in 2006.
“Young Blood – Renew” at Corn Exchange, Ipswich and Re+New Gallery, Woodbridge in 2009
‘The Discarded Made Beautiful’ with ‘Freelance’ at  The St. Nicholas Street Gallery, Ipswich in 2011
‘Suffolk Showcase‘,  at Smiths Row, Bury St. Edmunds in 2011 and 2013
‘Pop-up’ exhibition, Nancy Victor Gallery, London with RenewableUK in 2014
Prizewinners Exhibition, Ilminster Arts Centre, Somerset in 2016
'Beneath the Surface',  Ilminster Arts Centre, Somerset in 2017
'A Glorious Gallimaufry', Ilminster Arts Centre, Somerset in 2020
Regular showing with the Ipswich Art Society, of which I am a member.

My work is in various private and corporate collections in Britain and the USA and in local schools via purchases by Suffolk County Council. 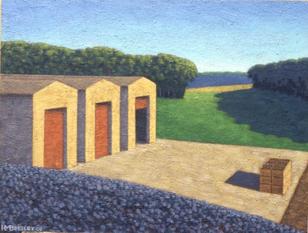